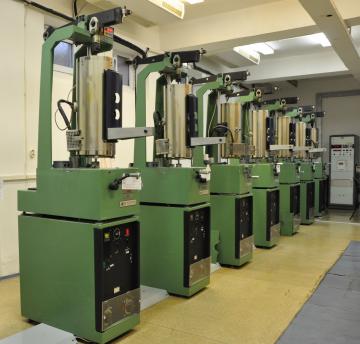 Eight creep machines for conventional tests of metallic materials up to 1000°C in air.

Creep laboratory is equipped by 8 commercial creep machine of SATEC company. Testing machines allow to perform creep tests under constant load at temperatures from 20°C to 1000°C. The loading capacity of the machines is up to 6000 N. Grips are designed to hold both round and flat tensile specimens with a gauge length of 25-50 mm. This system is mainly used for materials tested without protective atmosphere. Temperature is measured using thermocouples located on the test sample and controlled by the Eurotherm controller. Elongation of the specimen is indirectly measured using contactless linear magnetic sensor Emix from the loading mechanism movement and subsequently digitally recorded. With these testing machines, determination of basic creep characteristics such as time to fracture, creep speed and total creep elongation can be performed.

We use cookies on our website to give you the most relevant experience by remembering your preferences and repeat visits. By clicking “Accept All”, you consent to the use of ALL the cookies. However, you may visit "Cookie Settings" to provide a controlled consent.

This website uses cookies to improve your experience while you navigate through the website. Out of these, the cookies that are categorized as necessary are stored on your browser as they are essential for the working of basic functionalities of the website. We also use third-party cookies that help us analyze and understand how you use this website. These cookies will be stored in your browser only with your consent. You also have the option to opt-out of these cookies. But opting out of some of these cookies may affect your browsing experience.
Necessary / Nezbytné pro funkci webu Vždy povoleno
Necessary cookies are absolutely essential for the website to function properly. These cookies ensure basic functionalities and security features of the website, anonymously.
Functional / Funkční
Functional cookies help to perform certain functionalities like sharing the content of the website on social media platforms, collect feedbacks, and other third-party features.
Performance / Optimalizace výkonu
Performance cookies are used to understand and analyze the key performance indexes of the website which helps in delivering a better user experience for the visitors.
Analytics / Metrika návštěvnosti
Analytical cookies are used to understand how visitors interact with the website. These cookies help provide information on metrics the number of visitors, bounce rate, traffic source, etc.
Advertisement / Marketing
Advertisement cookies are used to provide visitors with relevant ads and marketing campaigns. These cookies track visitors across websites and collect information to provide customized ads.
Others / Ostatní
Other uncategorized cookies are those that are being analyzed and have not been classified into a category as yet.
ULOŽIT A PŘIJMOUT
Powered by